Enterprise drone usage in commercial applications has grown significantly in the past few years across a wide range of industries including the military, public safety, energy, mining, and agriculture. Enhanced ISR (intelligence, surveillance, and reconnaissance) operations, situational awareness, inspections, surveying, and search & rescue are just a few of the uses for commercial UAVs as organizations recognize how they can help them work smarter, safer, and more efficiently.  But we are still in the early stages of unleashing the full potential of drones to improve business operations. Innovative companies like Planck Aerosystems and Blue Vigil are working to make unmanned aircraft technology more efficient, more useful, and more beneficial. 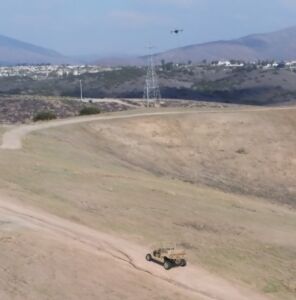 Planck Aerosystems is a pioneer in mobile autonomous operation. AVEM is a mobile tethered sensor platform designed for rapid deployment from moving vehicles and vessels on land or at sea. It is ideally suited for persistent ISR and communication relays. AVEM launches, ascends, hovers, descends, and lands at a push of a button. The tether system provides power for long-term operations and allows for secure communication and data transfer.

A Complete System for Mobile Operations

AVEM is a fully integrated unit consisting of multiple subcomponents including a military-grade aircraft, autonomous control engine (ACE™), tether module, DECK ground segment, operator control unit, tether, and payloads. Combined, they create a high-performance, fully autonomous UAS that can be quickly mounted onto vehicles and operated on the move.

AVEM’s tether system, designed by Blue Vigil, provides power to the aircraft for unlimited flight time. It includes a fiber optic cable for secure, high bandwidth data transmission. The tether is lightweight, yet strong enough to constrain the aircraft during takeoff and landing. It attaches to the DECK ground segment and the aircraft tether module (ATM) mounted onto the bottom of the aircraft. The ATM is an active tether management system that provides the interface for both power and data.

AVEM has broad use cases across industries, but it has unique advantages for intelligence, surveillance, and reconnaissance (ISR) operations, communications relay, and situational awareness.  AVEM, equipped with imaging sensors, supports persistent ISR missions while repositioning, on the move, or at sea. Power and data transferred over the tether allow for RF-silent signatures for low detectability and GPS-optional flight enables operation in contested environments.

AVEM can also elevate a radio relay payload to extend the reach of a communication network while on the move or at sea.

Planck incorporates Blue Vigil’s tether technology into the AVEM solution.  Blue Vigil makes an OEM power tether kit that allows integrators like Planck, as well as manufacturers, to package our core tether management and power delivery technology into a custom drone/tether platform that can be vehicle-mounted (ground/sea), man-portable, or both.

The OEM kit consists of four core modules that are independently packaged, allowing for flexibility in enclosure design and the ability to accommodate a weather rating up to IP55. The core elements include the tether (wet side), power module (dry side), motor unit, and air module (aircraft power conversion).